Writing about writing is all well and good, but it doesn’t beat just writing. So a few weeks ago I entered a flash fiction competition run by Faber, called “quickfic”. It’s just a bit of fun – 250 words to be written and submitted in a few hours, based on a photo prompt, hence “quick fiction”. And I came second! Which won me a lovely book of short stories.

I thought I’d share it here. So, here’s the image, followed by my little story. 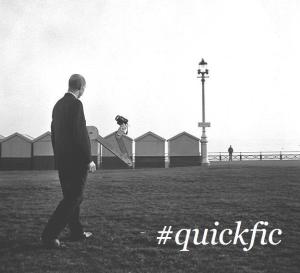 I suppose it is rather a lot of me, yes. It’s only that, well, Dorothy is just better with the camera. Says I can’t hold the darn thing straight! And who am I to argue?

There was actually quite a bit of sun for the time of year. She kept telling me; “Put a hat on George, for Pete’s sake! You’ll burn in a flash.” And she was right, as usual; I think I did go a bit pink.

But there were no crowds. You know how Dorothy hates crowds. All those queues and the litter and the bits of exposed bodies no-one really ought to see. So it was perfect really.

Planning was down to yours truly, of course. We’ve never really gone in for anything too fancy, so I chose the Seaview. Do you know it? Funnily enough, it’s got everything you’d need, apart from a view of the sea! We did laugh.

It was only for four days in the end. Enough time, really. Quite a few of things we’d have gone to see had closed. I wonder what these people do when they’re not running the steam train, or the ice cream stands or the postcard stalls. Do you think they fly south? Get away from the grey and the cold? Do they leave behind everything they’ve worked for for so long, just in the hope that there’s something more exciting on offer somewhere else? Perhaps they’ve got no choice. Dorothy would probably know.

(I should just explain that when I saw the photo, I took it to be a man wearing a homemade filming contraption – kind of an early selfie stick. Look closely! The story makes more sense if you can see that too.)